Will this chef make room for in vitro meat in one of Gordon Ramsay’s top restaurants?

Soon after he completed his training at the Instituto Commerciale in Lombardy, Italy could no longer hold Simone Zanoni and that is how he ended up with Gordon Ramsay in London. The volunteer became a protégé and eventually the right hand man of the famous Scottish chef, who only occasionally drops by the two star Ramsay Restaurant The Trianon in Versaille, where Zanoni manages the kitchen with fire and passion.

Zanoni’s love for authentic products straight from nature started in his childhood. As a young boy visiting his grandfather in the mountains, he milked animals himself and then churned the milk into cheese. From the moment his grandmother died, Zanoni was the one preparing the tortellini. Now he produces natural honey and he is trying to make time to set up his own brand of coffee, in line with Italian tradition. We asked Zanoni if he could square a ‘new’ product like cultured meat with his love for the organic, the traditional and the authentic. 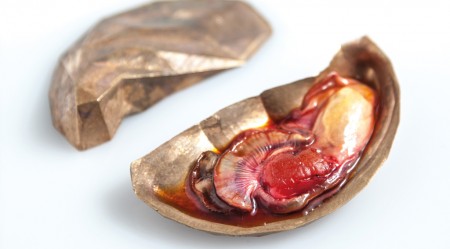 Simone Zanoni on new opportunities with in vitro oysters